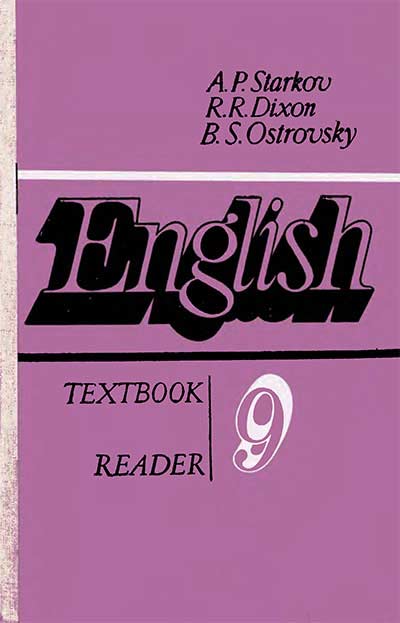 Invaders of the British Isles 114

Scotland Fights for Its Independence 116

King Arthur and the Knights of the Round Table. Parti 117

King Arthur and the Knights of the Round Table. Part II 120

King Arthur and the Knights of the Round Table. Part III 122

King Arthur and the Knights of the Round Table. Part IV 124

Reading in November and December

Task 9. Travelling in England Before Railways 132

Reading in January February and March

Task 19. How People in Britain First Got Their Names 151

Reading in April and May

Task 29. The Order of the Red Star

In a far country there was a giant who had a beautiful garden full of fruit trees, flowers and green grass. Every day he walked in his garden. But one day he decided to go on a long visit to another giant, a friend of his. For a long time nobody walked in the giant’s garden.

Then the children came. Every day, after school, they played in the giant’s garden. It was a splendid garden. The Ыгф sang in the trees, and their songs were so beautiful that the children stopped their games to listen to them.

“How happy we are here!” they cried to each other.

One day, however, the giant came back from the visit to his friend and saw the children playing in the garden.

“What are you doing here?” he cried angrily, and the children ran away.

“My own garden is my own garden,” said the giant, “and nobody will play in it.” So he built a high wall all round it.

He was a very selfish giant.

The poor children tried to play on the road, but it was full of stones, and they did not like it. They walked round the high wall when their lessons were over and talked about the beautiful garden,

“How happy we were there!” they said to each other.

Then the spring came, and in all the gardens there were beautiful flowers and little birds. Only in the garden of the selfish giant it was still winter. The birds did not like to sing in it because there were no children there, and the trees did not want to blossom.

“I cannot understand why the spring is so late in coming,” said the selfish giant, as he sat at the window and looked out at his cold, white garden; “I hope there will be a change in the weather.” But the spring and the summer never came. “He is too selfish,” they said. So it was always winter there, and the north wind and the snow danced in the garden.

One morning the giant was lying in bed when he heard some beautiful music. It was a little bird singing outside his window. He had not heard a bird sing in his garden for a very long time, and he thought that the bird’s song was the most beautiful music in the world. “I believe the spring has come at last,” said the giant; and he jumped out of bed and looked out.

What did he see?

He saw a wonderful sight. In every tree that he could see there was a little child. And the trees were so glad to have the children back again that they had covered themselves with blossoms. The birds were flying about and singing in the trees, and the flowers were

laughing in the green grass. It was a beautiful picture, only in one corner it was still winter. A little boy was standing there. He was so small that he could not climb up the tree, and so he was crying. The poor tree was still covered with snow, and the north wind was blowing above it.

“Climb up, little boy!” said the tree, but the boy was too small.

“How selfish I have been!” said the giant; “now I know why the spring did not want to come here. I will put that poor little boy on the top of the tree, and then I will destroy the wall, and my garden will be the children’s playground.” He was really very sorry for what he had done.

So he opened the door and went out into the garden. But when the children saw him, they all ran away, and the garden became winter again. Only the little boy did not run, because he did not see the giant coming. The giant came up to him, took him in his great hand, and put him up into the tree. The tree began to blossom at once. The birds came and sang in it, and the little boy kissed the giant. And the other children, when they saw that the giant was not angry any longer, came running back, and with them came the spring.

“It is your garden now, little children,” said the giant and he destroyed the wall.

And when the people were going to market at twelve o’clock, they found the giant playing with the children in the most beautiful garden they had ever seen.

Every afternoon, when school was over, the children came and played with the giant.

1. Where did children play while the giant was on a visit?

2. Why didn’t the spring come to the giant’s garden?

3. What did the giant do when he saw a little boy in one corner of his garden?

4. What did the people see when they were going to market?

The Words of the English Language

There are almost no words in modern English which come from the Celtic* language of the Britons*, who were conquered by the Romans. There are also very few words from the Latin that was used in Britain at that time.

Viking* invaders from Scandinavia added their words to the language of the Anglo-Saxons*.

For nearly two hundred years two languages were spoken in England — Anglo-Saxon and Norman-French. In the end, the language spoken by the greater part of the population became, in the 13th century, the official language of England. It is called Old English,Chaucer’s English, a language which is very difficult for English people to read today.

Later, English explorers and traders brought into the language many words from peoples living in different parts of the world. For example from Spain and South America came “potato”, “tobacco”.

Latin has given modern English more words than any other language.

Many words have come into the English language from classical Greek, for example, the Greek word “autos” meaning “self” gives “autobiography”, “automobile”, “autograph”, “automatic” and other words.

Greek and Latin together have given the world a very large number of international words — especially scientific and political words.

These words are used in most languages, though the form and pronunciation may follow the rules of the native language. Examples are not very far away. You have only to look at the list of international words in your textbook.

The English language, like all languages, continues to grow. New words are added from the dialects and languages of different peoples,

and especially from new developments In politics, science, sports, and all kinds of activities.

1. What languages have given very many of the words used in English today?

2. From what other languages have other English words come?

3. How has the English language continued to grow?

You have read a lot about places of interest in London. But London is a great city, and there is always something new to see or to read about.

One of the sights of London is the Horse Guards*. The “Horse Guards” means both the eighteenth century building in the street called Whitehall* and the queen’s cavalry. The building is at the back of a very large closed square called the Horse Guards Parade.

Today, horses are not seen as often as they were in the past, especially in towns. They are not used very much now. Machines, motor cars and lorries have taken their place. But you can see horses, horsemen and cavalry in the British capital every day.

In the morning, early, you may see horsemen and horsewomen riding in the parks, but not so often as in the past. However, the horse guards are more interesting to tourists than these horsemen.

Outside the Horse Guards in Whitehall at the gates into the Horse Guards Parade there are always two horse guards on duty. They wear red and white uniforms with big black riding-boots and big silver helmets. They carry swords. In winter they wear red greatcoats. From 10 o’clock in the morning till 4 in the afternoon they are on horseback; at other times they are on foot.

Every day people come to see the Horse Guards. Groups of tourists stand around and take pictures. Neither man nor horse moves, they stand like statues, and people discuss whether horse or man will move first. Sometimes children are held up to touch the head of one of the horses. The guard is changed every hour. This is an interesting ceremony to watch.