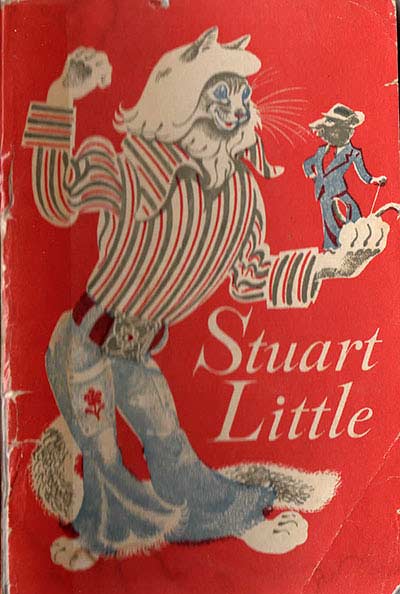 Mr. Little1 and his family lived in New York City.2 Mr. Little worked in an office. His wife, Mrs.3 Little, took care of the house.4 She was a kind woman and liked animals. She kept a white cat called Snowball.5 She also liked to play the piano. Mr. and Mrs. Little had a son called George,6 who went to school and liked to play ping-pong. In every way7 it was quite a usual family. But one day something very unusual happened to them, and that was when Mrs. Little’s second son was born.

When he was born, everybody saw that he was no bigger than a mouse. The baby looked very much like8 a mouse in every way. He was only two inches high,9 he had a sharp nose, a long tail and whiskers.

7 In every way — Во всех отношениях

I Before he was many days old1 he began to walk, just like a mouse. Mr. and Mrs. Little called him Stuart,2 and made him a bed out of a cigarette box.

Mrs. Little saw at once that baby clothes were not good for Stuart. So she made him a fine blue suit with a pocket in which he could keep his handkerchief. She also gave him a grey hat and a small stick.

Very soon Stuart could not only walk, but also run, jump and climb lamps by the cord.3 And that even before he was a month old!

When Stuart was a month old he was still so small and light that his mother sent for the doctor. The doctor liked Stuart very much and said that it was very unusual for an American family to have a mouse. He took4 Stuart’s temperature and found that it was normal fora mouse. He listened to his heart and looked into his ears. Everything was all right, and Mrs. Little was very glad to hear it.

“Feed him up!”5 said the doctor and went away.

The house where the family lived stood near a park in New York City. In the mornings the sun looked into the house through the east windows and all the family got up very early. Stuart was a great help1 to his parents and to his brother George. He was so small that he could do many useful things and was always ready to help. One day Mrs. Little went to wash the bath-tub and lost a ring from her finger. It rolled into the bath-tub and fell down the drain. “What shall I do?” she cried with tears in her eyes. “You must take a hairpin, and try to fish the ring out,” said George.

1 was a great help — много помогал

So Mrs. Little found a piece of string and a hairpin, tied the hairpin to the string and for half an hour fished for the ring.1 But it was dark in the drain and she could not find it—i-

“What luck?”2 asked MiL Little, who at that moment came into the bathroom.

“Let us send Stuart down the drain,”4 said Mr. Little. “Would you like to try,8 Stuart?”

“Yes, I would,” Stuart answered, “but I must put on my old pants first. I think it is wet" in the drain.”

So Stuart put on his old pants and prepared to fish for the ring. He took the string and gave one end of it to his father. Then he tied the other end round his waist.

“When I pull the string three times, you must pull me up,” he said.

So Mr. Little put Stuart down the drain. In a minute Stuart pulled the string three times, and his father carefully pulled him up. And everybody saw Stuart with a smile on Ins lips and the ring around his neck.

“How was it down there?”7 asked Mr. Little. He always liked to know about places to which he could not go himself. “It was all right,”8 said Stuart.

But everybody thought it was not very pleasant down there, because Stuart came back very dirty and had to wash himself quickly.

3 No luck at all — Никаких успехов

8 It was all right — Неплохо